The Concept of Kamay 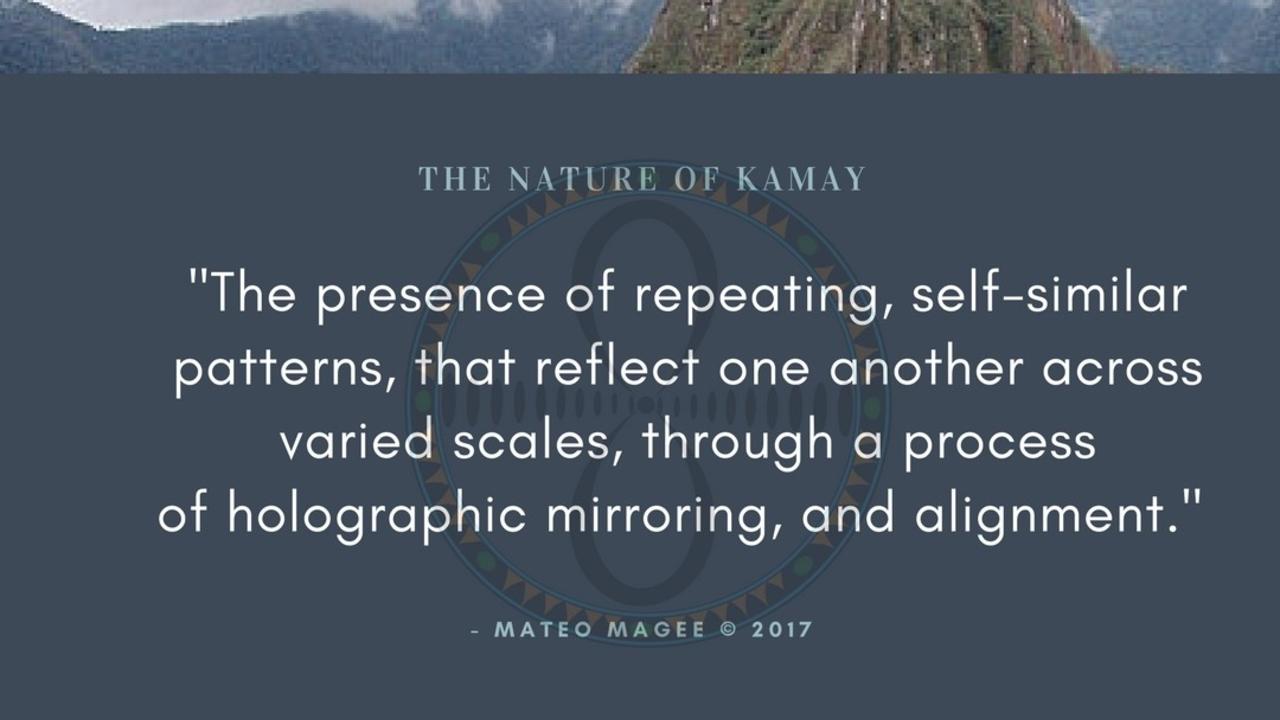 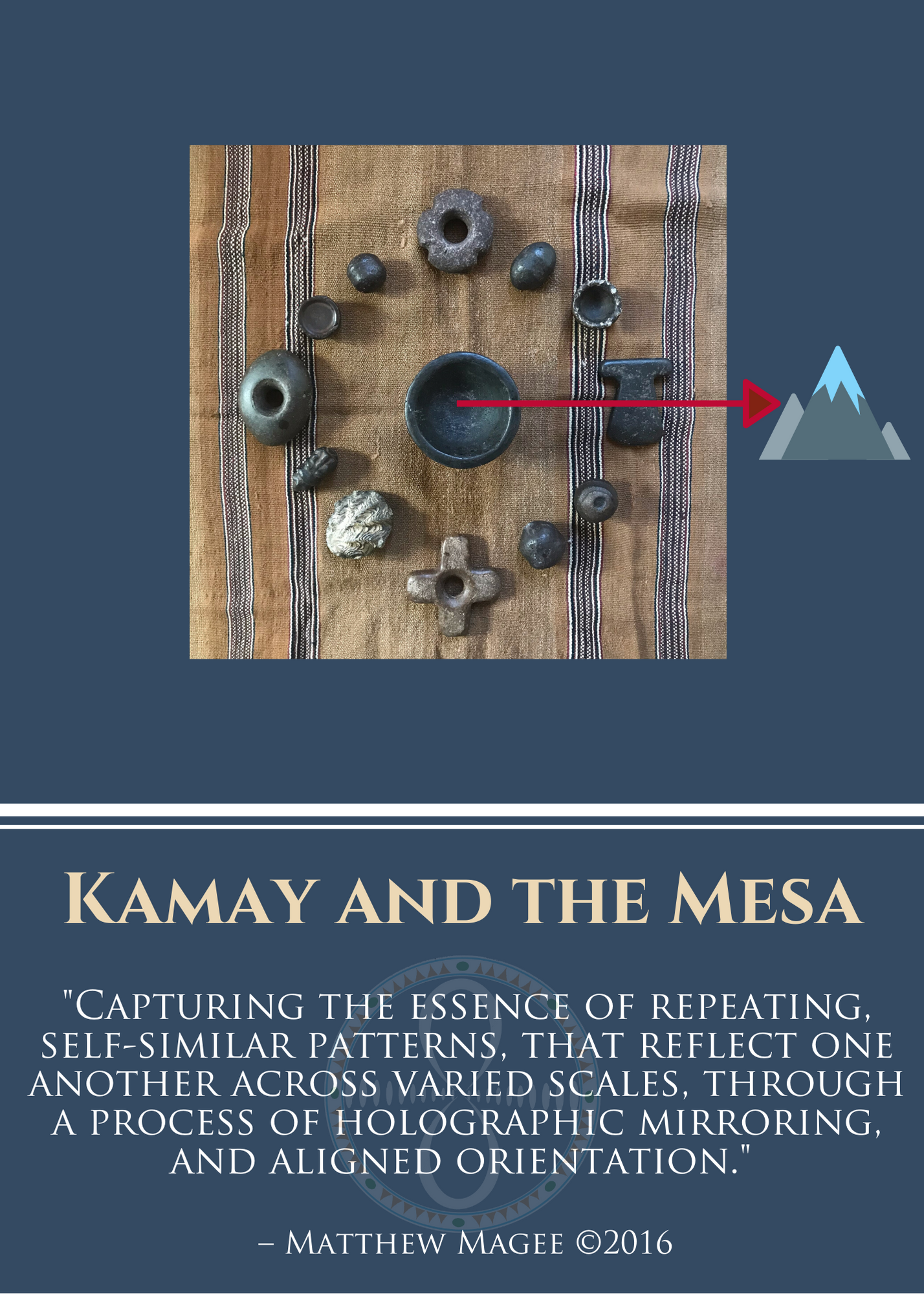 In 2015, I led a trip to Peru with anthropologist Dr. Bonnie Glass-Coffin, who is one of the world’s experts in the field of Peruvian curanderismo. As we traveled through the Sacred Valley and into the Northern Coast, one of the themes we shared (and explored) with our group was the concept of kamay and its role in the ancient cosmovision of the Peruvian peoples.  This concept refers to a method of “modeling” and “capturing” the essence of something, through a process of mirroring, reflection, and alignment (Magee and Glass-Coffin 2015).

The nature of kamay exists, on all scales, as an interwoven matrix of replicated forms throughout the universe, where the whole exists within the part and the part within the whole. An example being the majestic Oak tree, which exists within a tiny acorn, and the acorn exists within the Oak. Or the planets of our solar system (which are comprised of countless atoms) revolve around the sun, just as protons and electrons revolve around an atom’s nucleus. Through deeper exploration of kamay, one discovers that it functions like a toroidal hologram that has been sculpted through fractal-like geometry. In other words, forms are not seen merely as expanding and contracting in scale, but rather as self-generating expressions of life that are simulta- neously, and continuously, emerging from within their own center and folding back on themselves through time. Grasping the concept of kamay is key to understanding the essence of the ritual of Consecration, and the inner workings of the Mesa itself.

The concept of kamay was pervasive in Inca and pre-Inca cultures. Natural formations found across the landscape were seen as living embodiments of the peoples’ ancient cosmovision. For example, the Willka Mayu (Sacred River), which runs north and south of the city of Pisaq (i.e., the Urubamba and Patakancha rivers), was seen as a smaller model of the Milky Way, or Chaska Mayu (River of Stars). On a smaller scale, expressions of kamay were implemented into the construction of nearly every ancient ceremonial sanctuary built by the pre-Columbian peoples. For example, if the builders found a large stone that reflected the shape of a mountain behind it, they would implement that stone into their design to serve as a point of sacred focus and alignment (see figure 9 – note the rock walls at the bottom of the photo are built around the stone referenced.)

If one were to view this stone from any other angle, it would appear anomalous and meaningless, but when one positions one’s self in direct alignment with the mountain in the background, the stone in the foreground reveals itself as a smaller model or replica of it.  Moving downward again in scale, we find the creation of a Mesa is likewise a miniature expression of the larger landscape. For example, the 12 Apu stones placed around the centerpiece of the Mesa reflect and model the actual mountain they represent through the process of kamay, anchoring an aligned presence of the mountains they represent in relation to the geography of Cusco.

Great value was placed on the occurrences of kamay, such as the stone in the image above, for its ability to catalyze insight into the deeper meaning and pattern of life. For example, in order to observe the world from a shamanic perspective, a certain posture of inner and outer alignment needs to be established. It is from this place of alignment that the shaman is able to channel energy from a source location (i.e., a mountain) and anchor it into a physical object in smaller form (i.e., an object on the Mesa). 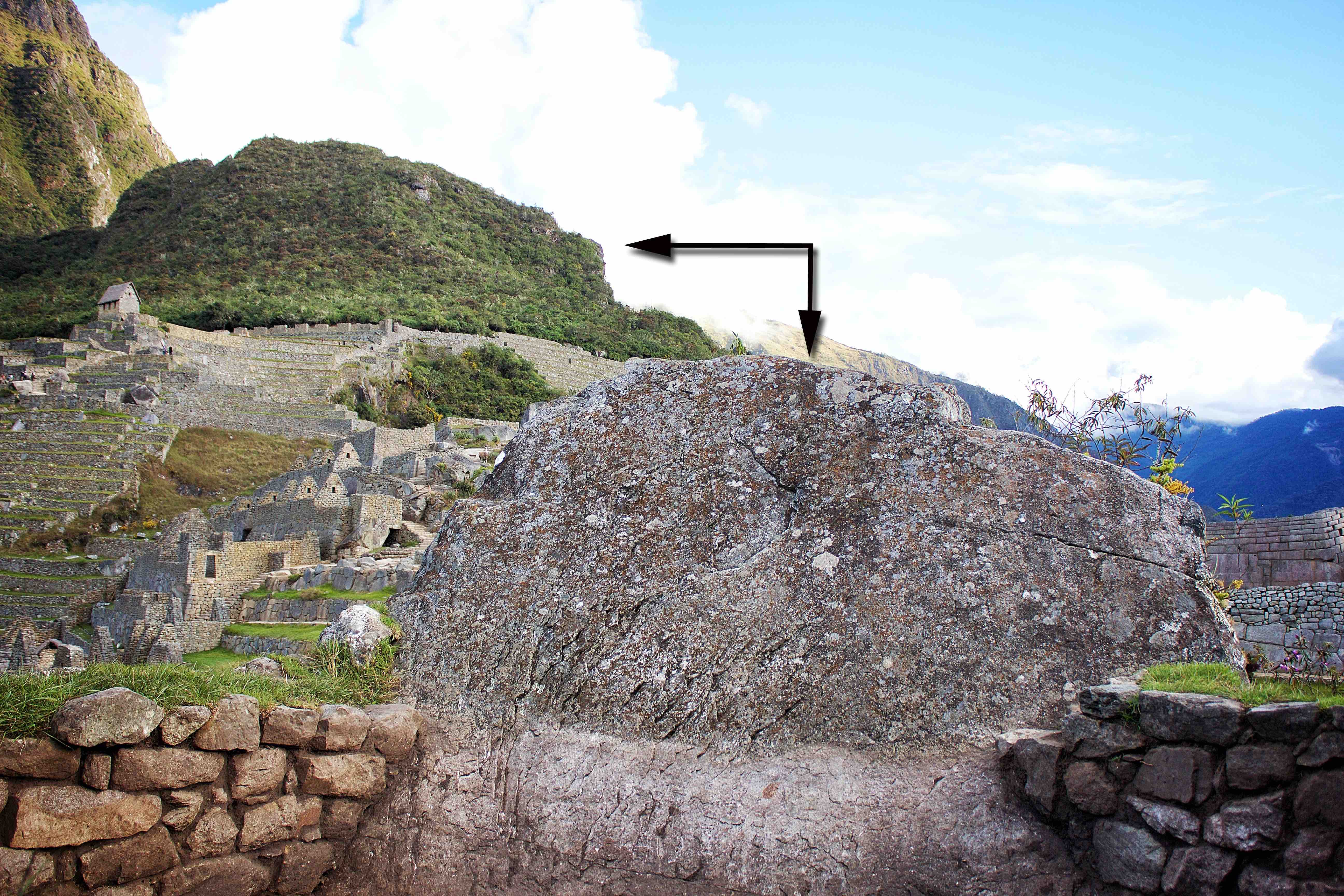 Expressions of kamay – anchored in stone, water, the stars, the Mesa, etc., – not only reveal the interdependent connection we share with all things, but they also show us the path to imbuing Mesa artifacts, and the Mesa itself, with medicine through the power of telescopic magnification. This occurs in much the same way a curandero prepares an herbal remedy (remedio). In order to brew a potent batch of medicine, the shaman must bring a large volume of water and plant material down to a single, concentrated dose through reduction. This same reduction takes place when energetic medicine is gathered and channeled through the process of kamay (i.e., the medicine of an entire mountain is now contained within a single stone). When this is achieved, a Mesa becomes a portable version of the surrounding landscape (both seen and unseen). Yet before kamay can be fully understood, one must deconstruct, and rebuild, the cosmovision of the Andean peoples from its known point of origin (paqarina).

Expressing this act of creation through ceremony is one of the greatest functions of the tradition. When a Mesa is constructed, the entire cosmovision of the Peruvian Andes is rebuilt, piece-by-piece, and its every element is brought into being through the alignment, reflection, modeling, and capturing of kamay. In other words, when one sets up a Mesa, one is building a miniature model of the Universe itself. Yet rather than using large stones in the landscape to model a mountain in the background (like the image above), one uses miniature items (or inqaychu) on a textile to model something that may, or may not, be visible in the immediate environment. For example, a medicine piece may be connected with a mountain from another country, a star from another galaxy, or even to an energy that exists in another realm (e.g., the Hanaq Pacha).

In order to effectively weave medicine into a Mesa, and subsequently manage the many layers contained within it, one must establish a central point from which to view it all. In the Mesa Tradition, this process begins by aligning oneself to the cardinal directions by sitting in the south and facing north. That way, as a Mesa is constructed, its pieces will be mirrors of the surrounding landscape in relation to its geography. In other words, when one looks to the right from this position, one will see the candle in the east, and by looking “through” it, one sees in the distance the rising sun that it is aligned to. To the west one will see the shell, and by looking through it, one sees the ocean, and so on.

Stay connected with news and updates! 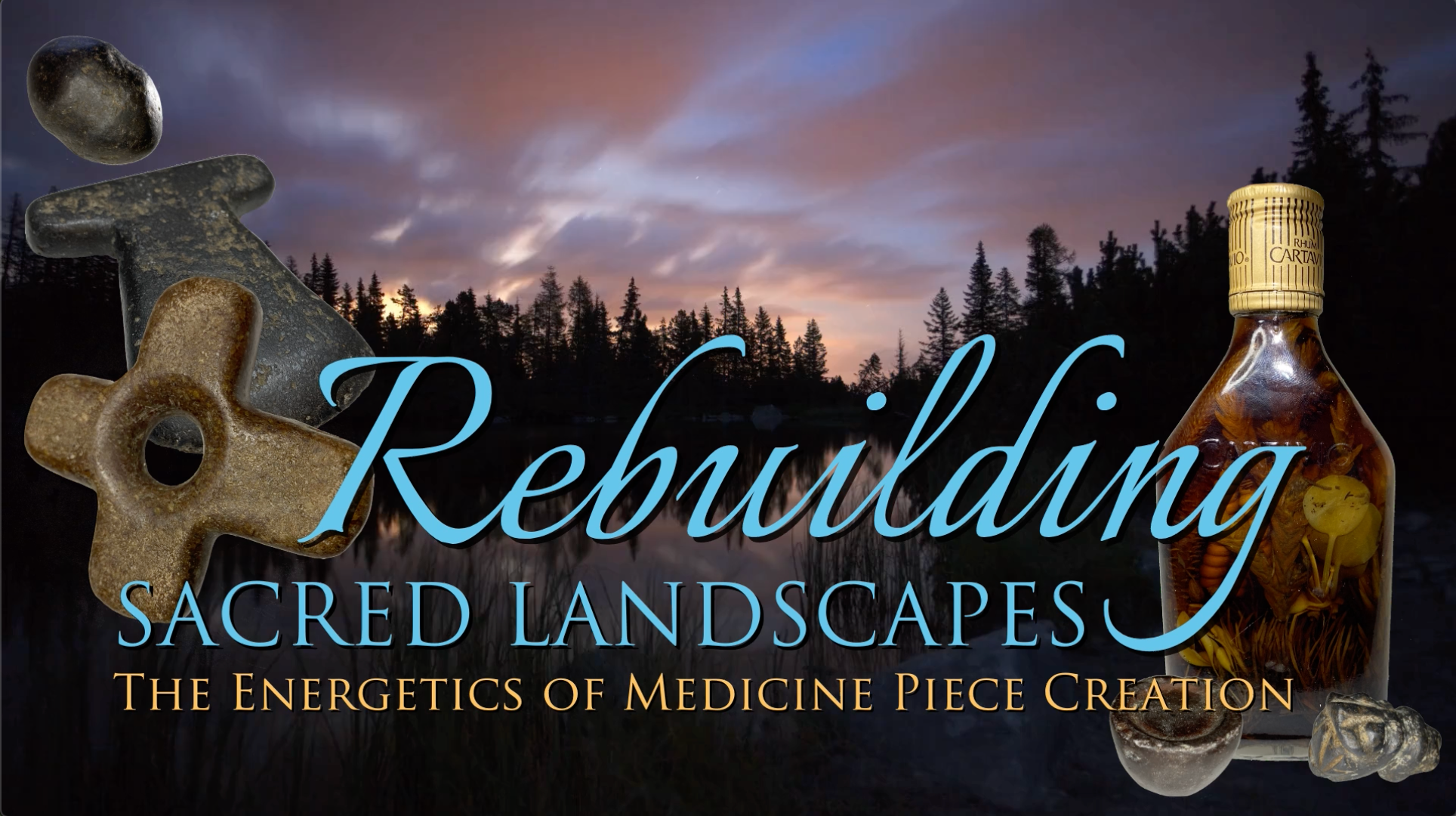 Check out the Newest Course!

To receive updates on upcoming courses and online events.